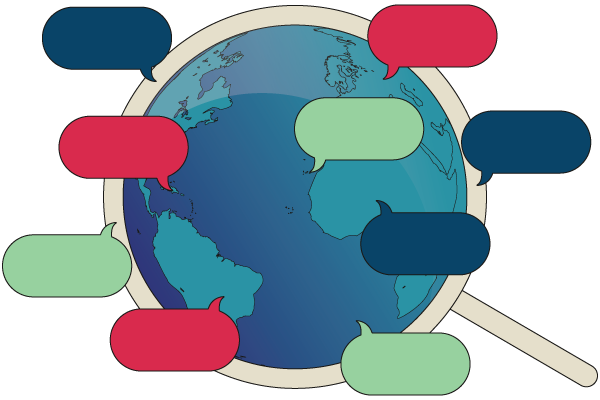 If you’re only monitoring for English in your surveillance strategies, you could be putting your organization in danger.

“Often, when communications aren’t in English or the native language, compliance teams struggle to keep up with the task of monitoring their workforce,” said Anna Griem, Senior Analyst at Opimas. “The importance of fixing this gap cannot be overstated. If ignored, the firm leaves itself blind to potentially damaging behavior that’s easily masked by an unmonitored language or dialect.”

Anna joined us at Relativity Fest last month to talk about the importance of surveillance across languages. Her talk shined a light on the current strategies firms are employing and where you may be falling short.

Although English is the most-used language for business globally, it is obviously not the only language spoken by businesspeople. Capital markets are vastly multilingual.

“The landscape of languages, accents, and dialects is quite diverse. Surveillance of just a limited set of these languages leaves the firm exposed to potentially bad behavior and unwanted regulatory scrutiny,” Anna said. She shared some quick statistics about employees at the world’s largest financial institutions:

Despite the glaring possibility of bad behavior being maliciously disguised by language, research shows that many financial organizations are not doing enough to monitor for multilingual communications.

Anna interviewed compliance teams at approximately 150 financial institutions about how they grapple with various types of surveillance requirements, including the challenge of multilingual communications.

“In terms of having a sound approach to multilingual surveillance, a lot of firms really fall short. It’s been quite interesting to see,” said Anna. “Significantly more than half the firms [surveyed] only monitor English or their native spoken language.”

“When we refer to basic multilingual surveillance, were talking about reasonably low-tech and familiar interventions; for example, employing compliance officers with varying language skills or instituting language bans,” she explained.

Advanced programs—those with more sophisticated translation and transcription tools—are limited, though large global institutions are beginning to make more of an investment in these technologies.

“Very simply said: Many firms have not yet set up multilanguage surveillance programs. This is not a great idea,” Anna said.

There are approaches with varying levels of sophistication that firms can take for surveillance monitoring. Low-tech options are a simple place to start, but they’re nowhere near bulletproof. Banning unmonitored languages, for example, is difficult to enforce and may come at the expense of efficiency. Similarly, employing multilingual compliance officers can be expensive, time-consuming, and difficult to source.

Instead, organizations are increasingly relying on technology to help monitor multiple languages and dialects. Finding the right technology, however, can be tricky, given the limited number of advanced options.

“Solution providers focused on communication surveillance have not typically prioritized coverage of multiple languages, with some exceptions,” Anna said. “Only a handful really stand out on this front of having been quite thoughtful. Relativity Trace is positioned quite favorably with strong language capabilities.”

Anna outlined some tactics that can help improve the surveillance of multiple languages or dialects, including translation tools, auto-language detection, multi-language search, and multilingual voice-to-text transcription—all of which Relativity Trace offers.

All in all, Anna explained, organizations cannot skimp on multilingual surveillance as part of their compliance strategy. Regulators won’t be forgiving.

“The regulators’ expectations of improved communication surveillance are global and have only been increasing in recent years. Even in these uncertain times, they’ve been quite clear that this not an excuse to be lax about the surveillance protocols,” she urged. “Lack of language coverage is certainly not going to be an excuse for letting that behavior go unnoticed.”

The Future of Compliance Monitoring

Is Your Organization Vulnerable to a Cyber Attack? 3 Steps to Put Your Mind at Ease