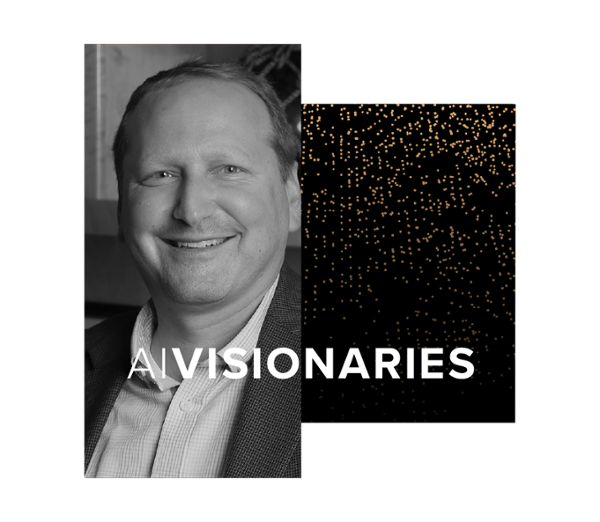 Informed by years of litigation experience across all types of litigation and investigatory matters, when AI Visionary Dave Orensten assumed responsibility for the e-discovery function at Cardinal Health, he saw a discipline ripe for improvement and opportunity. With help from his team, AI capabilities, and a dedication to developing further in-house capabilities, Cardinal Health’s Discovery Center of Excellence lives up to its name.

*Editor’s note: We spoke with Dave prior to his departure from Cardinal Health near the end of 2021. He has since joined Starbucks in the role of Director, Corporate Counsel - Litigation.

Can you briefly introduce yourself and summarize the work you've done at Cardinal Health over the years?

Absolutely. I'm Dave Orensten, former assistant general counsel of litigation at Cardinal Health. I joined the company in May 2009 and enjoyed more than 12 years as one of the in-house litigation and government investigation attorneys.

First, some background on the company: Cardinal Health is a healthcare company that operates a diverse portfolio of businesses as a distributor of pharmaceuticals, a global manufacturer and distributor of medical and laboratory products, and a provider of performance and data solutions for healthcare facilities.

I—and my former colleagues—handled almost every type of lawsuit or investigation you might imagine that a Fortune 20 company would face, across nearly every business unit, function, and geography. I've worked cases that include (but are not limited to): wrongful death accidents, antitrust investigations, complex international arbitrations, intellectual property disputes, product liability, insurance disputes and more … really everything across the board.

The team experienced a change in structure roughly five years ago, when the former discovery lead moved into a different role within the company. This allowed me to lean in and assume the role and responsibilities as Cardinal Health’s head of discovery, in addition to my day-to-day role supervising a significant portfolio of complex litigation and investigations. Essentially, a dual role.

During this time, I identified a significant opportunity to help evolve and further develop the company’s discovery team—or as it’s now known, the Discovery Center of Excellence. I built the business case to add additional headcount and bring on specialized expertise, including a new leader of our Discovery Center of Excellence; led the RFP for discovery service providers, consideration for what technologies were important to bring in-house, and determination of what companies we wanted to partner actively with (like Text IQ); and ultimately, helped successfully expand the discovery team and its capabilities, in a real and meaningful way, through addition of people, resources and technology. This also laid the groundwork for developing the discovery playbook and executing with more consistency across matters with respect to discovery.

How did your previous experience as a litigator impact how you prioritized and shaped the reimagined discovery process at Cardinal?

While at Cardinal Health but before taking on the additional role as head of discovery at Cardinal Health, I oversaw myriad significant, complex litigation matters involving a lot of e-discovery. One particular matter stands out as provoking my interest in driving discovery-related efficiencies. During the course of that matter, we had a lot of challenges and pain in the form of a massive document review and production. And the thing that stood out to me the most from that experience was the amount of spend on attorneys needing to look at things that no one ever needed to look at again.

I think this is an issue that’s pervasive across matter types, across companies, and probably across all litigation, where, for example, you start with a million total possible documents for review … and maybe a hundred documents of significance that ultimately move the needle in the case and become exhibits in depositions or at trial. When you think about how much time, money and effort is spent on items that nobody needs to look at again, it is extremely frustrating—especially if you're managing a budget and trying to be a responsible custodian of company resources.

This experience was enough to push me to be more efficient. For example, if we're starting with 10 million possible documents, how can we avoid having to look at the 9,900,000 documents that we really don't need to review in order to focus on what's truly important to the case?

How did you become interested in utilizing AI? And, since adopting AI within Cardinal Health, how have you seen it help to transform some of your team’s initiatives?

As a kid, I remember my family was really into LaserDiscs. As the predecessor to DVDs, they offered a wild user experience. We had to actually get up in the middle of a movie and turn the disc over to watch the rest of it. And some movies were four to six disks long. It made no sense, and there’s a reason they no longer exist. Technology evolved, DVDs came out, and you didn't have to flip them because they were smaller, easier and more portable … but it still took my family a while to migrate. In retrospect, this was the first time I remember not wanting to be a late adopter again.

That same curiosity continually helped pique my interest in exploring new technologies professionally. The significant case we discussed earlier? It was pretty eye-opening when I started getting into the metrics. Again, for the purposes of discussion: if we had in our repository 10 million documents, produced less than 10 percent of them, and identified an even smaller percentage of documents deemed significant… When you bake in the amount of time spent on the things that ultimately didn't get produced, it was a lot. So, from that point forward, we focused on what tools, techniques, ideas, strategies, and technologies that we could utilize to cull data and more efficiently focus our resources on finding the right key documents for case assessment and production.

Another area that I observed needing improvement and that could benefit from the use of AI was in privilege review. During the privilege review process in a lawsuit or investigation, one potentially privileged document might be reviewed by as many as six different attorneys to decide whether a communication is privileged. If this happened on one document, it wouldn’t be a big issue; however, in many cases you can have thousands of privilege determinations, so decreasing the total number of touches to make a privilege decision can provide significant accuracy and efficiency benefits. So, an area we focused on was leveraging AI to help streamline the privilege review process.

I also tremendously value benchmarking, within the in-house counsel community, among outside attorneys, and with experts dealing with these discovery issues every day. One of the organizations that I'm a part of is the Government Investigations and Civil Litigation Institute (GICLI), and firmly believe my involvement and engagement with that network helps me both avoid reinventing the wheel while benefiting from innovation and ideation processes.

For me, experimenting, exploring proof of concepts, vetting something new—it’s an opportunity. It’s not scary. While some are so set in their ways and comfortable with the status quo, I’d suggest that they could be missing out by not engaging in those conversations and considering if there are ways to enhance capabilities. Yes, it may take time to explore those potential new options—rather than just to continue down that known path—but it could absolutely be worth it.

What early interests do you attribute to why you decided to become a lawyer?

My family moved when I was in high school for my dad's job. We moved a lot, actually, but midway through high school, we moved to South Bend, Indiana. Two things stand out here: first, legal movies like A Few Good Men and A Time to Kill were really popular at that time. Second, though I had not previously been active in speech and debate, I decided to sign up for debate class as a junior at my new school.

Unbeknownst to me, that class also served as the debate team—thus introducing me to high school policy debate, which was often very focused on legal issues and public policy development. That focus, paired with my enjoyment of those legal movies, probably put me on my path toward law school.

What would you consider to be your greatest personal or professional achievement?

On the personal front… I’m very proud of my family. It’s just awesome to see the people my two boys are becoming—they’re bright, funny, creative and kind—and our family is actively involved in giving back to our community. My wife and I ride annually in Pelotonia, a big fundraiser for cancer research; we look for opportunities to engage with our neighbors and community on local initiatives throughout the year; and we foster dogs through Columbus-based rescue Stop the Suffering. Since the start of the pandemic, we’ve fostered more than 20 dogs (!!) and help socialize them through interaction with our own two dogs (one of which was an early “foster fail”, of course).

Professionally, I'm a very big believer in the power of “we.” Early in my legal career, I wrote an email to a client with references to “I” and, afterward, I remember meeting with the partner on the case. He said, “You know, Dave, there really is no ‘I’ in ‘team.’” It’s a simple sentiment—but was a definitive and defining moment that deeply resonated with me. To this day, I actively and intentionally use “we” in describing the work we're doing—while always doing my best to focus on being a strong team player, actively mentor and serve as a resource to colleagues (both within and outside the legal team), and helping to focus on the positivity that truly being a team can bring a group of colleagues.

I share this in particular because, when I'm talking about the Cardinal Health discovery team and its growth, it’s virtually impossible to attribute major successes to one single person. I am proud and grateful to have been part of the team that helped develop the program, carried out the work to improve the discovery process, and realized measurable progress—adding clear value, efficiency and cost savings—over the course of my time at Cardinal Health.

I'm excited for what lies ahead for my former colleagues—and for me, on my new adventure. And of course, I can’t wait to see how AI and other emerging technology opportunities will continue to evolve and improve our collective, professional future.

Hannah Baxter is a strategic partnerships account executive at Relativity.

Debevoise & Plimpton's Avi Gesser on How AI Inspires the Curious

AI from A to Z: Visionary Brett Tarr on High-Tech e-Discovery, Privacy, and More