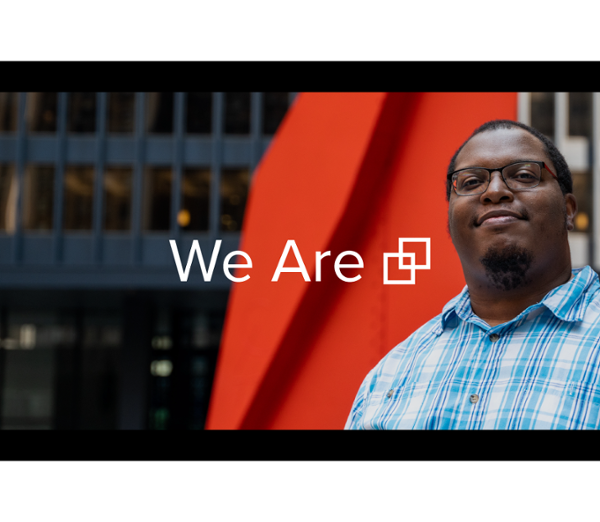 I’ve had a major uptick in uncomfortable conversations in the last two years. Whether it’s talking COVID, politics, or my career, I've been pushed outside of my comfort zone. And I have to be honest, I haven’t always spoken my mind.

Corey Ward, on the other hand, has mastered the art of direct, difficult conversations.

Through working with Corey, I learned one of the most important things about him: he keeps it real 100 percent of the time. The authenticity that Corey brings to all his conversations has paved the way for BRel (Black at Relativity) to have difficult conversations about race in the workplace—a topic that would have been considered taboo a mere five years ago.

Corey’s story inspired us to reflect. Reflect on what family looks like for us. Reflect on the racial tension that the world has traditionally turned a blind eye to. Black History Month is celebration of Black culture. Corey and I challenge you to have a conversation this month (and every month) that makes you uncomfortable and to "sit in the gray" with us.

Tip #1: Set Ground Rules for Yourself

When we discuss sensitive topics, it’s natural for our emotions to flare. How we deal with those emotions can set the tone for an entire conversation.

“Setting ground rules for a conversation is a way to ensure that you don’t get caught up in the moment and say something you don’t mean,” Corey said. “When we talk about race, or racial tension, there’s an immediate defense that comes up. People assume you are calling them evil when you tell them something they did was racist or inappropriate.”

Corey said that many of the conversations that need to happen aren’t happening because people are too worried about hurting each other’s feelings. But when we set ground rules for a conversation, it enables both parties to express themselves in a safer space.

One of Corey's go-to ground rules entails being completely present in the conversation. That means phone notifications off, closing those tabs in Chrome, and plugging in to the person you’re with.

Another ground rule Corey always comes to the table with is being honest—with ourselves and with the people we’re talking with.

“You can’t just say what you think the other person wants to hear,” he added. "Having a conversation is about the melding of the minds to understand one another’s perspective, meeting them where they are. That’s where the magic can happen.”

Tip #2: Get Comfortable with the Uncomfortable

We’re all guilty of letting expectations get the best of us—whether it’s at a meeting, in a conversation, or even at a new restaurant. As humans, we’re naturally attracted to certainty. But when it comes to having impactful conversations, there is power in the unknown.

“There is a gray area in conversations,” Corey explained. “As humans, we naturally want everything to be straightforward—we want a yes/no, a do/don’t, a black/white situation. But there’s not always going to be a hard and fast answer for everything. Embrace the gray. Sit in it.”

When Corey said this, I immediately responded, “But being in the gray is uncomfortable!” To which Corey replied, “Get comfortable with the uncomfortable.”

Reframe your feelings. When we’re uncomfortable, we tend to categorize the feeling as "bad” and try to get out of it as soon as possible. But, when we recognize this feeling as being essential to growth and learning, sitting in the gray feels a bit better. Also, remember that no feeling is permanent. When we're uncomfortable, it can feel suffocating—like it will never end. Recognizing that we’re growing and that no feeling is permanent is empowering.

Having a conversation with someone close to us about problematic behavior is often difficult. However, to create change, there needs to be uncomfortable situations. Manage those expectations and get close to that feeling of being uncomfortable.

Conversations about sensitive topics can often turn defensive. It’s human nature. To combat this, Corey recommended people take the time to listen to the content of the conversation. And he doesn’t mean listening to respond; he means listening to hear someone.

That way, you can respond thoughtfully and engage in a conversation—not an attack.

“The goal of these conversations isn’t to win or agree,” Corey said.  “It’s about creating a dialogue and learning different perspectives.”

So often, we get caught up in wanting to get our point across that we don’t take the time to listen. While the other person is talking, we’re crafting our response in our head. But having tough conversations is about more than being right.

As Corey put it, “You can’t always change someone’s mind, but you can always make them think.”

Blair Cohen is a writer on Relativity's brand team, where she focuses on telling compelling stories, capturing insights from our community, and representing the company with energy and enthusiasm.

Having Her Voice Heard: How Aidana Om Inspires Women and Girls across the Globe