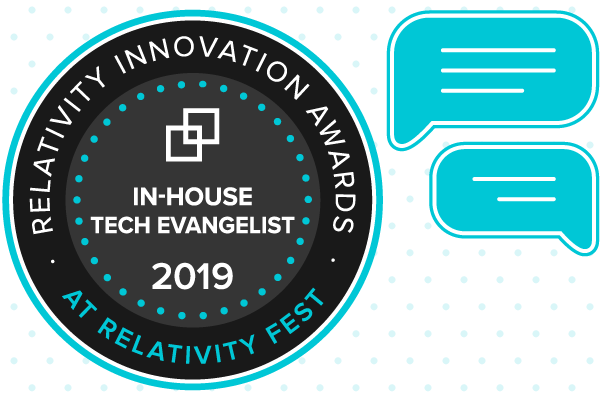 “I am seriously awkward,” says Sara Skeens. But, as I’m interviewing her, I have a hard time believing it.

Even over email, it’s clear that Sara has one of those warm and friendly personalities, the type of person who can put anyone and everyone at ease. She cracks quick jokes, she quotes Conan O’Brien, and everything she says has this inviting, charming element. You almost feel like you’re part of her story. And there’s a lot to learn.

“My journey into e-discovery was a happy accident,” she begins. “I had originally planned to either go to law school or be some version of Jack Bauer from ‘24.’ But I got a job as a secretary at a firm, and the attorney who I was working for saw something in me. She let me perform tasks that other secretaries were not. She involved me in her cases, pushed me to get creative, find solutions, and try things.”

That attorney, it turns out, would be an influential force throughout Sara’s career. So influential that Sara has kept a memento from her, even years later.

“When I moved into the e-discovery team and got my first office she bought me two trees. One is now in my daughter’s room as a reminder that [the attorney] believed in me and taught me to always lift others up and foster their potential.”

Since that first job, Sara has jumped all over the field, from the law firm to the government to private vendors and now to the corporate world as a principal associate of cyber technical at CapitalOne, where she’s doing exactly what that attorney taught her: lifting up others and fostering their potential.

That quality is one of the many reasons Sara was awarded the In-House Tech Evangelist Award at the 2019 Relativity Innovation Awards. In fact, according to her nominator, it’s Sara’s unique ability to understand where everyone is coming from that makes her stand out.

Her background and her philosophy on life paint an even clearer picture of why Sara is definitely award worthy.

Building a Career Takes a Village

That attorney at the first law firm was pivotal to Sara’s career, but she wasn’t the only one who influenced and helped her along the way. In fact, Sara attributes much of her success to a long list of mentors and teammates from careers past.

There’s the consultant at that first firm, who invited her to join the new e-discovery team. “They took a chance on the weird little secretary who loved computers,” Sara jokes, calling the moment a pivotal point in her life and career.

“That consultant—you know who you are—taught me the core of how I operate today. Never just rely on the software. Question it. Know how it works. Be curious and never use or sell something that you don’t understand in and out.”

Then, there’s that same law firm attorney—the one who gave her the tree—who eventually helped her build a team and gain experience in several different areas of the field and in management. “It was something I would have never had anywhere else. She knew I could do it and gave me the confidence to rise to the challenge,” Sarah says. “The team I managed taught me so much about myself and about managing people. I’ll always have a place in my heart for them; that experience meant so much to me,” she says.

Fast forward a few years, and Sara landed her first consulting job and met a manager “turned friend for life” who taught her an important lesson: it’s okay to be you.

“I didn’t have to conform to anyone else's expectations, I just needed do my thing. He taught me to not be afraid to push forward with my ideas, fail, and learn from that failure,” she says.

Learning to Talk Her Talk

Though Sara is comfortable in her skin now, things weren’t always that way. In fact, she recalls small talk as being one of the biggest challenges early in her career.

“It’s important to sell yourself in this field, and when I started out, I took the approach of acting like those around me—learning about the small-talk subjects that I knew others were interested in, relying on sales tactics, and spending hours preparing for conversations. I lost my uniqueness.”

Eventually, she says, she learned that all that time spent prepping was, in a way, her big draw.

“I was weird, and that’s why I was good at what I did and had passion for the field,” she says. She learned that engaging with others in the industry and “selling herself” didn’t have to be done in traditional, extroverted ways.

“It was okay to recharge my social batteries periodically. I didn’t have to go to every networking event. Forging strong, one-on-one relationships and utilizing electronic methods was better for me than in-person interaction all the time.

“It’s all about finding the tools that work for you to get to the outcome you are looking for. You don’t have to copy the path of anyone else.”

“I think I stopped breathing for a few moments,” Sara says about her big Innovation Award win. “I wasn’t able to attend Relativity Fest that year due to a medical issue, so I was sitting on my couch watching the live stream. It took me a few minutes to process that they said my name and once it settled in, I started screaming and jumping around the living room. I was home alone and the dog thought I had gone insane.”

Since winning the award, Sara has maintained her usual, down-to-earth attitude—but with an even more poignant need to continue pushing boundaries. Much like the tree in her daughter’s room, her Innovation Award serves as a nice daily reminder.

“Trophy-o sits on my desk, staring at me with those look-into-your-soul googly eyes, and reminds me to keep pushing,” Sara says. “Sometimes when you have new ideas, they don’t always take off right away. People may not be as passionate as you are at something, but as my stubborn two-year-old has taught me, if you believe in it, don’t let anything get in the way.”

Sara adds that the award is also about more than just her accomplishment. It reminds her that, as individuals, we all have a responsibility to pursue our passions.

“We need a culture of confidence and vulnerability to bring out all of those ideas. The more people who come forward and use their experience to bring ideas to the forefront will ultimately shape how our field evolves and our innovative drive across the board.”

Want to learn more about Sara? We asked her 15 non-work-related questions to get to know the woman outside the office. Head to the Relativity Community site to read more.

Working from Home? These Apps Can Help You Practice Self Care

How to Navigate Digital Transformation as a General Counsel: Insights from IDC