What Every e-Discovery Professional Should Know About FRCP 37(e) 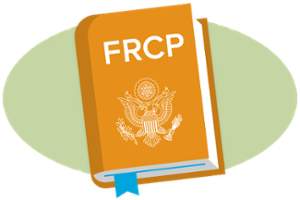 Legal and e-discovery professionals are no doubt aware that some changes are coming to the Federal Rules of Civil Procedure this year. The revisions are set to take effect in December, assuming they are approved by May—and we’re hearing a lot of interest in the proposed changes to Rule 37(e), which focuses on spoliation.

Let’s take a look at the expected changes so you can get an idea of what’s on the horizon and assess whether you need to make any changes to the way you collect and store ESI.

“Failure to Provide Electronically Stored Information. Absent exceptional circumstances, a court may not impose sanctions under these rules on a party for failing to provide electronically stored information lost as a result of the routine, good-faith operation of an electronic information system.”

Rule 37 was amended in 2006 to include subsection (e) and was sometimes referred to as the “safe harbor” rule. The rule was originally considered a safe harbor because, in its attempt to protect those parties whose good faith operations result in lost ESI, there was no clear guidance for how or when courts should impose sanctions. That sounds good, but many think it wasn’t tough enough; as a result of that broad language, it did not give judges detailed guidance on when sanctions might be appropriate, and it certainly did not say when sanctions were required.

Problems with the Current Rule

Even when the amendment was first adopted in 2006, the Advisory Committee knew that ESI would continue to grow and that difficulties related to maintaining critical ESI would inevitably create more problems in e-discovery. The move toward amending or changing the current rule started in earnest with the 2010 Civil Litigation Conference at Duke Law School, where the Judicial Conference Advisory Committee on Civil Rules gathered to discuss ways to improve the civil litigation process. The Duke Conference produced a recommendation that revisions to 37(e) were needed.

Many thought the rule, as it was, lacked direction. If judges were to impose sanctions, those sanctions had to be based on other rules. But judges were not consistent in enforcement or sanctions. The circuits varied a great deal. As a result, parties felt forced to spend a lot of money on preserving ESI for fear of being hit with sanctions. In 2014, the committee recognized this in its official report to the Standing Committee:

“This limited rule has not adequately addressed the serious problems resulting from the continued exponential growth in the volume of such information. Federal circuits have established significantly different standards for imposing sanctions or curative measures on parties who fail to preserve electronically stored information. These developments have caused litigants to expend excessive effort and money on preservation in order to avoid the risk of severe sanctions if a court finds they did not do enough.” (Committee on Rules of Practice and Procedure, Report of the Advisory Committee on Civil Rules, Washington, D.C. May 29-30 2014, p. 318.)

No one argues that the duty to preserve electronically stored information is always present. We know that when litigation is anticipated, a party has an absolute duty to preserve any related evidence—no court has said otherwise. The problem is that sometimes relevant ESI simply gets lost. So, the courts have struggled with how to respond when the duty is triggered but ESI is lost anyway.

Unpredictable reactions to lost ESI in the courtroom, however, are not the only problem litigants face under the current rule. Another is the fear that any loss of ESI will be considered negligent. That fear has meant parties often feel they must preserve way too much data—and over-preservation creates a logistical and financial burden on everyone involved.

When they set out to revise Rule 37, the committee did not attempt to detail how to preserve ESI, but address what a court’s response should be when there is a failure to preserve what should have been preserved. These are the revisions the Standing Committee on Rules of Practice and Procedure approved last May and are expected to go into effect in December, along with a handful of other changes:

(e) Failure to Preserve Electronically Stored Information. If electronically stored information that should have been preserved in the anticipation or conduct of litigation is lost because a party failed to take reasonable steps to preserve it, and it cannot be restored or replaced through additional discovery, the court may:

(1) upon finding prejudice to another party from loss of the information, order measures no greater than necessary to cure the prejudice; or

(2) only upon finding that the party acted with the intent to deprive another party of the information’s use in the litigation:

The new rule is intended to settle disagreements between circuits regarding what action should be taken when ESI is lost. However, courts still need to use discretion when addressing ESI loss because no two cases are the same. Not only are circumstances different in each case, but the-ever increasing volume of ESI and all its forms require that the rule be broad enough to encompass the changing electronic landscape.

Any discussion of sanctions is gone; in fact, the word does not even appear in the revised version. Further, there is no reference to 37(b)(2)(A) as a source for sanctions (as there was in an earlier version of proposed changes). The goal of the new rule is to be more about solving problems caused from lost ESI than punishment for the loss.

Breaking Down the New Guidelines

The revised rule is laid out in specific steps. The focus is, first, on what a court can do to cure the loss. The rule only comes into play if a party fails “to take reasonable steps” to preserve ESI. There is no absolute standard here.

So, what is reasonable? The Standing Committee report notes that courts will consider “party resources and the proportionality of the efforts to preserve.” (Report at 312.) Presumably, then, the bigger the corporation, the easier ESI is to preserve. The court will have to decide if reasonable steps were taken and whether the ESI can be restored or replaced. The court could also require more discovery to make these determinations.

If the lost ESI cannot be replaced or restored, the court may make one of two findings:

1. A party is prejudiced due to the loss of information, OR

2. The party acted intentionally to keep the ESI from being used.

Under the new 37(e)(1), even if reasonable steps to preserve were not taken, the court will consider the relevance of the lost ESI. Then, it will ask whether there was prejudice as a result of the loss. The rule does not address which party must prove or disprove prejudice. The measures a court can take upon a finding of prejudice are curative in nature.

Then, for the more punitive 37(e)(2), the consequences are more severe. A finding of prejudice is not required, but it’s assumed that if it’s important enough to intentionally withhold, the other party would likely be prejudiced. In this case, the court just needs to find intent. If the loss is intentional, there is a presumption that the information was unfavorable to the party who lost it. The court has some options once it decides the loss was intentional: it can give an adverse jury instruction, dismiss the action, or enter a default judgment.

Required proof of intent is essential to the new guidelines. Is there often intent to hide or destroy ESI? Not likely. Proving intent is important in issuing responses to lost ESI because, often, the real problem is that there is just so much ESI to keep track of and store in the first place.

Challenges to keep track of information are growing every day. The new rule recognizes the burden all this data places on litigants. It also seems to acknowledge that there will be cracks—after all, even the best efforts cannot eliminate the possibility that important information may go uncollected, unreviewed, and unproduced. So, the focus is not on punishment against the party who failed to preserve the ESI, but on how to remedy the loss so that the case can move forward. We think this will give courts the right perspective, recognizing that mistakes happen.

As you digest the rule changes, you might consider whether you should revise the way you store, preserve, and collect ESI. We always advocate that a solid legal hold policy be included in your process. Having all you do documented and the documentation in one central location can be very beneficial, and a reliable, repeatable process will minimize mistakes and help your cases run smoothly through the courtroom. As the revisions to 37(e) place a new focus on prejudice and intent, products like Relativity Legal Hold can help you show the court that you’ve taken reasonable steps to preserve your ESI. If you could use some help with these workflows and documentation options, let us know. We’re happy to help.

Stan is a member of the customer success team at Relativity and has worked in litigation since 2002. An experienced attorney, Stan offers a practical perspective on overseeing and conducting document review for a variety of cases with a mind for cost-effectiveness and efficiency.