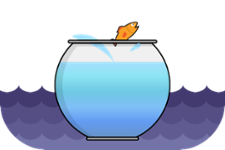 We talk a lot about innovation; it’s a life vest in the sea of change that defines e-discovery and the practice of law. Members of the community met to discuss the past, present, and future of innovation in the Forum on Legal Evolution this November, and they had some fascinating proof points to showcase just how far we’ve come.

From challenging their in-house teams to thrive on data, to offering greater access to justice, and educating a new generation of lawyers to better prepare for the needs of their future clients and employers, evidence of progress abounds.

#1: Bringing in-house legal into the world of data.

Kicking off the forum, Wendy Rubas—general counsel for VillageMD—shared her journey as a modern general counsel. Her biggest career lesson has been the necessity of using data to drive decision-making in the corporate legal world. It’s a culture shift in many ways, but it’s how in-house legal teams can have a greater impact on their businesses.

Because the nuts and bolts of legal work may not look as impressive as pure dollars and cents to decision makers in other fields, Wendy found it difficult to “feel like a superstar” when she went in-house. After much iteration, she’s since discovered that showing the right data can be the bridge that helps non-legal professionals close the gap between in-the-weeds legal work and bottom-line results.

That said, it isn’t easy to make a major impression—with or without data to back up your position.

“Data models start flawed and improve,” Wendy cautioned. Legal teams—especially those just getting their feet wet with hard numbers that quantify their often philosophical work—should be prepared to receive hard questions, face insights they didn’t see themselves, and go back to the drawing board.

Those are just challenges from colleagues. We also, she noted, need to be prepared to face some challenges within ourselves.

“People have an irrepressible urge to show data and then point out why it doesn’t matter,” Wendy noted in her presentation. “Don’t do that.”

#2: Sharing critical skills with the new wave of professionals.

There’s a lot of talk in the legal world about how a traditional law school curriculum may not cut it when it comes to empowering new lawyers with the knowledge they’ll need to kickstart their careers. But what is everyone doing about it?

Some schools—such as those in the Relativity Academic Partner program—are modernizing their offerings with new courses. But it can be quite a hurdle for one or two advocates in each of those schools to affect change at such a high level. That’s where the College of Legal Operations, being developed by Bill Mooz and Bill Henderson, comes in.

“Resourcing and cultural constraints make it difficult for law schools to solve this problem on their own,” they noted during their portion of the forum.

That’s why they’re building a program to fill in the gaps. In partnership with law schools, corporations like Microsoft and VMware, and law firms, the college will offer courses in the form of boot camps. Students will be immersed in subjects such as “Business for Lawyers” and “Legal Technologies,” giving them a chance to gain valuable exposure to these skills without removing them from their core studies. The program will go on to offer certifications that validate a range of skill levels, as well as internships that provide real-world exposure to what they’ve learned and how those skills can be applied to their future careers.

This herculean effort to improve education for the next generation was very well received. It’s an excellent example of how the efforts of today’s legal professionals will have echoes in the future of this space.

The Civil Resolution Tribunal (CRT), now in operation in British Columbia, Canada, is the world’s first government-run, online dispute resolution model for civil disputes. Richard Rogers, executive director and registrar of the CRT, and Kandis McCall, its director of case management, joined the forum to speak about its implementation and success.

They opened their presentation with a haunting call-to-action from Chief Justice Beverly McLachlan, of the Supreme Court of Canada: “The most advanced justice system in the world is a failure if it does not provide justice to the people it is meant to serve.”

Richard described how citizens with legal claims were often struggling to access the traditional justice system. Issues of finances, geographical distance, or scheduling burdens often dissuaded them from filing their claims, despite it being their right to do so.

Available for small claims under $5,000 as well as the most common condominium disputes, the CRT offers filing, facilitation, and adjudication online for low fees. There’s even a process for exchanging relevant data as needed.

Since July 2016, 2,600 applications have been filed, and 825 have been completed. Surveys show that the overwhelming majority of users were satisfied with the understandability, ease-of-use, and fairness of the process. Thanks to this success, Richard and Kandis have set goals to improve the technology and open it up to larger claims in the future.

The final content for the forum was all focused on the community itself, and those who stand out in it. Paul Lippe and Mark Chandler sat atop stools and recounted their storied histories in the legal world (both were later roasted in the forum’s evening celebration of their lifetime achievement awards). Their stories were ripe with innovation and creative thinking, yes, but also full of kudos to one another and many other friends forged along the way.

Between those conversations, and the ones held during the forum’s many networking opportunities, it was clear that this community is fueled not just by passion for the work, but passion for people. It was a lively crowd, growing in diversity, and full of folks who are more than willing to help one another succeed and move the industry forward. It’s the type of environment where innovation blossoms.

Sam Bock is a member of the marketing communications team at Relativity, and serves as editor of The Relativity Blog.

Navigating the Digital Geography of Remote Work in Legal

4 Thoughts from the e-Discovery Community to Inspire You