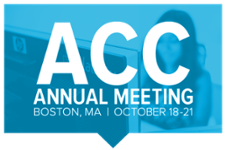 The 2015 Annual Meeting of the Association of Corporate Counsel (ACC) brought about 3,500 legal professionals to Boston last week for what is billed as the world’s largest educational event for in-house legal counsel. Kicked off by Harvard Business School associate professor Amy Cuddy, the event included legal education content ranging from protecting the attorney-client privilege to protecting your executive presence in the office.

As its name implies, ACC is an organization of and for lawyers, but in covering this year’s conference, we found seven tips useful for just about anyone working on a legal team.

4. Be careful with publicity in a crisis.

The session “Crisis Management and the Role of In-house Counsel” included speakers from FleishmanHillard, ISK Americas, United States Steel, and the Canadian-based international law firm, Gowlings. Chris Nelson, senior vice president and partner at FleishmanHillard, warned of the “Streisand Effect,” referencing Barbra Streisand’s $50 billion lawsuit against coastal erosion researchers for violating her privacy by photographing her seaside mansion. Before Streisand sued, the photo had been downloaded six times—including twice by her lawyers. However, in an illustration of the law of unintended consequences, in the month after Streisand filed suit, the photo was downloaded 420,000 times.

5. Don’t be over-inclusive when protecting privilege.

Mary Blatch of ACC, Mark Hopson of Sidley Austin, and Stephen Marzen of Bechtel Corp. gathered to discuss the protection of the attorney-client privilege and the work product doctrine. Among some of the best practices they offered were:

6. Make sure a lawyer is present to protect privilege.

The session “User Generated Content: Friend or Foe?” included speakers from MillerCoors, MolsonCoors, entertainment company Lionsgate, and SAG-AFTRA, the labor organization created by the merger of the Screen Actors Guild and the American Federation of Radio and Television Artists. Not surprisingly, the panel focused on intellectual property issues, and Rachel Kimbrough, senior vice president for business and legal affairs at Lionsgate, illustrated how user-generated content can be both friend and foe. Kimbrough noted that unauthorized user-generated art about films, such as her studio’s film, The Hunger Games, can trigger copyright issues, but she noted some of the art is really good, and you may want to license it, adding, “Some of our most lucrative licensees are former infringers.”