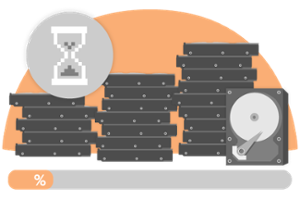 Ensuring your e-discovery collection is defensible has always been critical, but it hasn’t always been easy. In fact, in the early days, it sometimes got a little awkward.

Ten years ago, toward the beginning of my career as an e-discovery consultant, the process was considerably more painful. Without remote, targeted collection options, collecting data was costly and time-consuming.

Unfortunately, some teams still feel this pain—despite the technology on the market to make it easier. If you've recently worked on a manual collection, these cringeworthy anecdotes from the field may hit close to home.

Collecting Off the Map

In 2008, Shana Kirchner, a kCura education specialist, was in the early days of her career as an e-discovery consultant. While working for a litigation service provider, her first solo job included traveling to small-town Wisconsin to collect data from six custodians at a large snack food company.

Shana had to fly into a small airport three hours away from the Wisconsin town. At the time, Google Maps couldn’t locate the company’s office, so she had to find it the old-fashioned way: directions from a gas station attendant.

When she finally made her way to the cabin-themed office, Shana sat in a room and imaged the custodians’ hard drives one by one. Each machine took roughly two hours to image. One custodian’s computer wasn’t compatible with her specialized equipment, but Shana had a back-up option: she used collection software on her own computer to copy an image of the hard drive. New to that process, Shana accidentally copied an image of her hard drive, not the custodian’s. Without realizing her error, she finished collecting the remaining data, packed up her equipment, and made the three-hour trip back to the airport.

Unfortunately, a TSA officer mistook Shana’s giant terabyte hard drive and its protective case for a CD player and asked her to open it. The officer grew annoyed as she attempted to explain that it was actually a hard drive and couldn't be opened. By the time she had straightened out the situation with security, the last flight to Chicago had departed. Shana had to spend another night in a hotel on the company’s dime.

She finally made it back to Chicago—only to find an image of her computer in place of a custodian’s. Without any other option, Shana’s employer sent her back to copy the correct hard drive.

May the Force Be With Your Collection

Almost a decade ago, while working on a second request for a merger in the entertainment industry, I was tasked with collecting data from more than 75 custodians’ machines.

Before I jumped in to collect the data, an attorney and an e-discovery manager conducted an extensive interview with each custodian to learn about what data was on their computer, where everything was stored, and what might be relevant to the matter.

This is where I came in. The e-discovery manager gave my colleague and me a sheet of paper for each custodian, including highlighted folder names to indicate what should be collected. Because we had to manually collect the necessary data from each machine, we had to work outside of business hours to avoid disrupting the custodians’ time in the office. We spent the entire weekend at the office with a member of the client’s IT team. The IT professional’s purpose was unclear, especially since he was watching Star Wars the whole time we were collecting. My best guess is that he was a friendly spy, making sure we weren’t sticking our digital noses where they didn’t belong.

While our chaperone was rebelling against the Empire, we were logging into each custodian’s computer, searching for the data highlighted by the attorney and project team, and waiting around while the data transferred to our hard drive. Unlike Shana and team, we got the job done in one trip, but I look back on that weekend collection as a collective waste of everyone’s time.

Whether it means a weekend at the office or an excursion to the middle of nowhere, collections can still be manual and time-consuming. While Shana and I, like our peers in the industry, have since nailed down a lot of expertise on the technical processes that drive e-discovery, these complications haven't been completely eliminated. Fortunately, better tech means they don't always need to slow down your case team.

What are your best stories about collecting the old-fashioned way? Let us know in the comments.

Jacob Cross was a member of Relativity’s customer success team, where he helped Relativity users make the most of the platform.