Great Moments in Blowing the Attorney-Client Privilege in e-Discovery 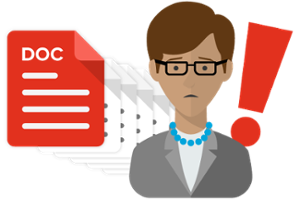 When most people think of “inadvertent disclosure,” they probably think of something along the lines of the Jackson-Timberlake Super Bowl “wardrobe malfunction” that resulted in the U.S. Supreme Court case, FCC v. CBS Corp.

However, when we e-discovery lawyers think of inadvertent disclosure, we’re usually talking about malfunctions such as the recent one where the Canadian government redacted the names of Ebola patients with easily removable paper and tape. What’s worse for e-discovery lawyers is that these mishaps often result in waiving the attorney-client privilege.

A recent trio of cases may help practitioners navigate the dangerous waters of inadvertent disclosure and the attorney-client privilege. We’re calling these teaching moments Great Moments in Blowing the Attorney-Client Privilege in e-Discovery.

Great Moment No. 1: The Skype Slip-up

Earlier this month—in a dispute over head-mounted displays for 3D and virtual reality—a litigant learned Skype messages can come back to bite you and the lawyers learned “inadvertent” disclosures really have to be inadvertent if you’re going to get any protection from waiving the attorney-client privilege.

In Total Recall Technologies Inc. v. Luckey, No. 15-cv-02281 (N.D. Cal. May 17, 2016),  the parties had a protective order preserving the attorney-client privilege in the event of inadvertent disclosure. It was important to them because the defendants were Oculus VR, LLC, the virtual reality company Facebook bought in 2014 for $2 billion, and Oculus founder Palmer Luckey.

In the litigation, Total Recall alleges unfair trade practices and a breach of a confidentiality agreement by Luckey and Oculus after Total Recall shared technology with Luckey.

When producing Skype communications last year, Total Recall redacted significant portions, claiming privilege. After a meet and confer, Total Recall delivered an amended production with some of the redactions removed.

Unfortunately for Total Recall’s counsel, some of those removed redactions covered privileged information, and the lawyers wanted to claw back the documents as an inadvertent disclosure under the protective order.

“Although it appears that TRT's counsel probably now wishes it had done so more carefully, TRT's counsel actually reviewed these skype logs and made a determination to reveal the portions at issue,” U.S. Magistrate Judge Sallie Kim wrote. Thus, the court held, the disclosure was not inadvertent, and the attorney-client privilege was waived.

Why This Great Moment Matters: Although technology-assisted review (TAR) makes it possible to avoid reviewing every document in a client’s data, no good lawyer would produce any document without reviewing it first—and no TAR protocol would call for producing any document without reviewing it first. Here, the court said that because a lawyer reviewed it, it couldn’t have been an “inadvertent” production. Although this case has somewhat unique facts—e.g., removing redactions for an additional production—does it mean that if you’ve reviewed it, it’s not inadvertent? Scary thought (but the see Rule 502(d) discussion below for reassurance). Also important in Total Recall is that the data originated in Skype. As practitioners should keep in mind: e-Discovery: Not Just Email Anymore.

When rulemakers considered Federal Rule of Evidence 502 to address the proliferation of data and the related perils of inadvertent disclosure, they were thinking about big cases with millions of documents. After all, on such big productions, something is bound to slip through the cracks.

Unlike some complex commercial litigation matters, Montanans for Cmty. Dev. v. Motl, No. CV-14-55 (D. Mont. Mar. 10, 2016) had relatively few documents, and a dispute over the attorney-client privilege and the work product doctrine developed over one litigant allowing another to review a small number of documents.

The court held the privilege was waived because this intentional disclosure of a relatively small number of documents was not the kind of inadvertent disclosure rulemakers had in mind when they approved Fed. R. Evid. 502(b).

“Here, the issue at bar does not involve a situation where protected materials were inadvertently disclosed through the production of thousands of documents,” Chief District Judge Dana Christensen wrote.

Why This Great Moment Matters: Litigants need to remember that Fed. R. Evid. 502(b) doesn’t act as a magic wand to recover anything you disclose foolishly to the other side. The size of the document corpus and the way documents are turned over matter. As the Montana court noted, for the protection of Fed. R. Evid. 502(b) to apply, the producing party must have taken reasonable steps to protect the privilege, and the Committee Notes to the Rule provide: “considerations bearing on the reasonableness of a producing party's efforts include the number of documents to be reviewed and the time constraints for production.”

Great Moment No. 3: The Careless Client

In February 2016, plaintiff Joyce Justus traveled from North Carolina to Virginia for a medical examination by defendant Ethicon’s selected physician. Upon arrival, medical staff told Justus the doctor was unavailable.

Unhappy after traveling the highways and byways of Dixie to make the appointment, Justus pulled out communications from her attorney that included the date and time of the appointment.

Unfortunately for Justus, it also contained information subject to the attorney-client privilege.

The doctor’s office copied the document and passed it on to defense counsel. When counsel for Justus tried to clawback the allegedly privileged material from the clutches of Ethicon, the court held that, by voluntarily giving Ethicon’s doctor the document, Justus had failed to take reasonable steps to prevent disclosure, as required to preserve the privilege under Fed. R. Civ. P. 502(b)(2). As U.S. Magistrate Judge Cheryl Eifert noted in Justus:

In this case, Plaintiff failed to take reasonable precautions to prevent disclosure of the Letter. She physically delivered the Letter to Dr. Ryder's staff without making any effort to limit the staff's access to the information contained in the Letter…Unlike most inadvertent disclosure cases, the Letter was not one of thousands of documents in Plaintiff's possession that she accidently disclosed with non-privileged materials, and she was not pressured to produce the Letter by Dr. Ryder's staff.

Why This Great Moment Matters: Counsel should remember that the attorney-client privilege is only as safe as those who hold privilege, including clients without knowledge of how the privilege works. Clients can—and do—waive the attorney-client privilege even when they didn’t mean to do it. The Justus court distinguished a protected inadvertent disclosure with the situation in Justus. “When a client makes a decision—albeit an unwise, or even mistaken, decision—not to maintain confidentiality in a document, the privilege is lost due to an overall failure to maintain a confidence.”

After reviewing these recent cases, one might think the biggest takeaway from these Great Moments in Blowing the Attorney-Client Privilege is that the protection the rules provide for inadvertent disclosure under Rule 502(b) have some serious limitations. However, a bigger takeaway may come from a related rule, Fed. R. Evid. 502(d).

That’s why U.S. Magistrate Judge Andrew Peck and others argue litigants should not rely on Rule 502(b). Instead, they should avail themselves of an order under Rule 502(d).

You see, under 502(d), neither you nor your careless client in the doctor’s office has to worry about being reasonable because Rule 502(d) has no such requirement. As Judge Peck notes, “It’s your Get Out of Jail Free Card.”

Thus, the biggest takeaway from these Great Moments in Blowing the Attorney-Client Privilege is: Get a 502(d) order.