Top 7 Moments from the 2021 Innovation Awards 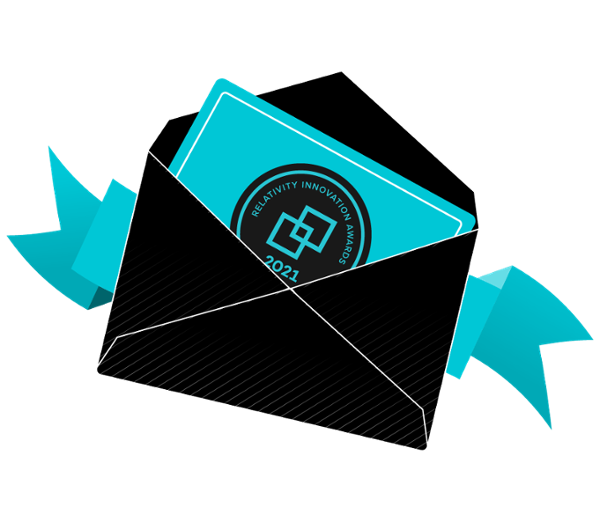 The Innovation Awards certainly brought the energy at Relativity Fest 2021. Having had the privilege of working on the awards throughout this year, from opening nominations in early spring to seeing co-hosts Blair Heidenreich and Mike Obregon light up the stage in October, I must say: it is one of my absolute favorite programs that Relativity develops.

That’s because it is all about the community. From learning about tech innovations to how an individual impacted another’s career, it makes one proud to be part of a growing industry where talented individuals are continuing to push the envelope—and lifting each other up along the way.

Here are some of my favorite moments from this year’s Innovation Awards. (Have some others that come to mind? Feel free to drop them in the comments below.)

As we marched toward another virtual Relativity Fest this past summer, Brand Director JC Steinbrunner notified our marketing team that the awards ceremony would be able to happen live. Many of us creatives had a moment of panic.

In 2020, as it became clearer that the COVID-19 pandemic was grounding pretty much everyone, we pivoted to host Relativity Fest virtual. We worked to put together sessions, keynote videos, and an entire awards ceremony like never before—and it was a success. Engagement was high, we showcased our community well, and everything ran smoothly from a tech perspective. (I mean, I thought it was a success until I, oddly, was not asked back to host the Innovation Awards. But that’s neither here nor there.)

So, this year, pivoting in the opposite direction—to producing a live broadcast with onsite presenters and crew members—came as another shock.

But after the initial surprise simmered, we realized this was a great opportunity. We prevailed last year in putting on an engaging show, and we were excited to do it again in a whole new way. Our production team worked with award finalists and co-hosts to imagine what this year’s ceremony could look like. We strategized to ensure we brought a vital component to life: our community.

After securing the content, creating a show flow, and conducting several dry runs, we were ready to go. The tech was working, Mike and Blair had their rapport down, and we were counting down the hours.

As a crew member, I felt the energy as we were seconds away from starting the show. The last year and a half has been all about pivoting, innovating, and adapting. Seeing this particular iteration of that agility come to life was a really cool moment.

#2: When Persistence Paid Off.

Each year, the Innovation Awards highlight how our partners are solving their clients’ challenges. The ceremony is our finalists’ chance to shine a spotlight on how they’ve managed to use technology in unique ways. In 2021, we saw how Sky Discovery developed a way to handle unique appeals like medical intake forms for product liability cases. Exiger shared how integrating their proprietary solution DDIQ with Relativity leads to greater cost and time efficiency.

A fan favorite moment was when JND eDiscovery pulled the W for Virtual Helpdesk. As Mike Obregon noted during the ceremony, this was JND’s fourth time submitting for the Innovation Awards. This year, they are walking away with their first win, and boy did they earn it. The application aimed to solve a problem posed by the pandemic: lit support professionals working in silos in remote settings. JND has helped breathe a pulse back into those teams by enabling  better collaboration through features like remote chat.

Congratulations to JND and thanks for the reminder that persistence is key.

#3: When You Spotted All the Cameos.

Everyone loves a good cameo. I am partial in wanting some Bravolebrities to make an appearance, but as it turns out, what we got was even better.

We had some industry rockstars make their way to the stage. For those who attended Fest in 2019, you had the opportunity to meet the Innovation Awards’ mascot, Tropheo. (Is this legendary name not ringing a bell? Check out his introduction at 10:22 in 2019’s show.) Tropheo took some time to find himself in 2020 so we missed him last year. But, this year, he made his comeback by casually chilling on the live stage. He may not have had a big part, but big things await for 2022.

A familiar face also graced the Innovation Awards’ stage, one that is at the crux of the Innovation Awards: Drew Deitch. Drew is a seasoned Innovation Awards host. He has hosted the awards for the past several years thanks to his role in our developer community. Under Drew’s leadership, his team empowered our customers to leverage Relativity’s APIs and customize the platform to solve complex challenges.

This year, with a new gig to tackle, Drew handed over the hosting reins to his friend and colleague, Mike. The two clearly have a close relationship. I mean, you saw that five-second pizza video, am I right?

When it comes to cameos, there was another unexpected one. Embarrassingly, it was unplanned, and from yours truly. Unbeknownst to me at the time, I made an appearance during the ceremony as I hovered in the background of a shot. I am not sure if this lapse in awareness was due to Mike’s daughter’s adorable photo distracting me, or the pressure of being next in line to pop the confetti. But I do know that my colleague and onsite producer Nicholas Matecjak was not amused. Alas, the show must go on.

#4: When the Community Sang their Praises.

We launched our persona-based awards four years ago to highlight inspirational leaders. These individuals elevate their colleagues, drive innovation, and enact change in our industry. These awards celebrate Stellar Women, inclusion advocates, lit support all-stars, and many more.

Whether championing a new process or teaching the next generation of paralegals, these leaders have made a tremendous impact on people throughout their careers. For the first time, we had nominees share these inspirational stories about the finalists.

We learned how Stellar Women finalist Rebecca Grant has mentored her team members to take leads on projects. Corporate Tech Evangelist finalist Benjamin DeWitt's teammates shared how he innovated their e-discovery processes. Every finalist has made a big impact, and it was inspiring to learn about their stories.

Of course, our winners had impressive and inspiring stories to lift them up, too. Congratulations again to Alicia Hawley, Siva Palepu, Christopher Campbell, Nikolai Pozdniakov, Heena Bhambhlani, Briordy Meyers, and Sara Skeens.

#5: When Missions Came to Life.

UNITAD's mission is powerful. They assist national authorities in delivering justice for the victims of the Islamic State in Iraq and the Levant (ISIL). In 2014, ISIL took control of Mosul, later advancing into northern Iraq and committing atrocities against both individuals and communities. With a team of technology and subject matter experts, UNITAD works to collect, preserve, store, and analyze evidence that could feed into domestic courts in Iraq and around the world in response to these atrocities.

They built an application to help them act on their mission: Zeteo, which won in the Enterprise category of this year's awards. Using the tool, investigators can work to uncover the truth of what ISIL did to the Iraqi people  and use that evidence to prosecute those responsible.

Innovation is all about partnership, and the strongest partnerships are formed around a central mission. According to Sareta Ashraph, officer-in-charge of UNITAD, she noted their innovation, Zeteo, is "really a crystallization of two principles that have guided UNITAD: innovation and partnership.”

Dave Hasman, currently the chief information officer at UNITAD, explained the important role partnerships played in bringing this tool to light. UNITAD worked with multiple UN agencies, Microsoft’s AI for Humanitarian Action, and Relativity developer partner NSerio, as well as the Danish government who was a trust fund donor for the application.

Our production team worked with this year’s winners on their acceptance videos. All were very moving in illustrating their impact and their gratitude for the recognition. One, though, really struck a chord with its innovative nature.

Lit Support All-Star winner Nikolai Pozdniakov's acceptance speech was a true cinematic experience. As he so often does in his regular vlogs for e-discovery enthusiasts everywhere, he took viewers through a journey. We all got to see how he received the award while on a tour of San Francisco.

I chuckled when imagining our art director at Relativity, Guss Tsatsakis, watching the video for the first time and seeing Nikolai drop the trophy on a series of rocks. Thankfully, it was a dummy award so all was well and intact!

(Want to see the short film? Check it out in the ceremony recording.)

#7: When New Ground was Broken.

This year was full of firsts—the first hybrid awards ceremony, the first time we awarded an individual the AI Catalyst Innovation Award (that’s you, Briordy Meyers!). It was also the first tie in Innovation Awards’ history over the Community Choice award for our tech finalists.

Fittingly, the Community Choice award is selected by the community (this year, our esteemed community of Relativity Certified Administrators). And they voted for two all-star innovators: Gilbert + Tobin and Lineal Services.

Gilbert + Tobin's HyperView aims to streamline the circulation of hyperlinked bundles of evidence between parties. Lineal Apps also took home the gold for offering a suite of AI apps. According to the Lineal team, the application was made possible through a close collaboration between their team and their clients.

It has been remarkable to see how so many companies, individuals, and teams have innovated despite the obstacles thrown their way. On behalf of Relativity, we applaud all of you who are reimagining how technology can tackle unique problems and making our industry better every day. I can’t wait to see what’s to come in 2022.

The Visual Theme of Relativity Fest 2021

Recognize Our Community & Get Voting for the 2021 Individual Innovation Awards

The Best of Relativity Fest 2021: Our Favorite Commentary

Innovation Awards 2021: The Best Relativity Apps of the Year