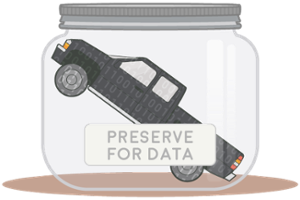 In the digital data world of 2017, the Internet of Things is nothing new. Whether it’s alleged Alexa commands from an Amazon Echo or German regulators banning the doll “My Friend Cayla” over concerns nefarious characters could endanger children with the data the alleged toy spy collects, the Internet of Things has become a legal issue.

The legal issue is usually data privacy and protection—but not always.

When Below v. Yokohama Tire Corp., goes to trial Monday, March 6, it should serve as a cautionary tale for e-discovery counsel and legal technology teams. When we think of collecting electronically stored information (ESI), email, texts, social media, or data centers often come to mind.

However, ESI is just about everywhere, and if you miss it, it could hurt your case.

As we’ll see from reviewing the discovery in Below, even if you think you’re litigating only over a defective tire on a pickup truck, you’d better preserve the whole pickup—including its ESI.

Just after noon on September 14, 2013, Joshua Below was driving his 2005 GMC Sierra pickup truck on Interstate 94 near Lincoln, Kansas, when he lost control of the vehicle. The pickup rolled over and crashed, leaving Below incapacitated.

At the time of the crash, Below’s truck was equipped with Yokohama LT Geolander H/T-5, Model G051, 8-ply, Load Range D tires. The Japanese tire company and its American subsidiaries had manufactured Below’s tires in the fiftieth week of 2006 at its plant in Salem, Virginia.

Because Below had been declared incompetent, he sued through his wife and guardian, Debra Below. In their product liability action, the Belows alleged the Yokohama tire was defective, claiming strict liability and seeking damages for negligence.

In their suit against Yokohama and its US subsidiaries, the attorney representing the Belows served as guardian ad litem on the children’s loss of consortium claims. Their daughter, Charlie, was 14 months old at the time of the accident, and their son, Patrick, was born two months after the crash.

The Belows filed suit initially in state court in Wisconsin, but Yokohama removed the action to federal court based on diversity of citizenship.

This week’s pretrial decision, Below v. Yokohama Tire Corp., No. 15-cv-529 (W.D. Wisc. Feb. 27, 2017), had the standard motions in limine to exclude evidence and arguments one would expect before a product liability trial.

The Belows moved to prevent defense counsel from referring to issues between the Below family and Joshua Below’s ex-wife (granted), from presenting expert testimony on whether Joshua Below was wearing a seatbelt at the time of the accident (denied), from referring to collateral source payments the Belows may have received (granted—with prejudice as to liability phase, without prejudice as to damages phase), and others.

However, not all the pretrial arguments addressed in US District Judge William Conley’s opinion and order were such standard fare.

Although the Belows preserved one of the tires from the pickup, the truck itself was destroyed at a salvage yard before they filed suit.

So, if they preserved the allegedly defective tire, why does it matter if the pickup met an untimely demise at the junkyard?

Yokohama argued the destruction of the pickup hampered their ability to defend against the suit because they were unable to evaluate things such as the suspension and steering systems, the seatbelts, the other three tires, and the truck’s electronic data recorder.

We’re all familiar with the high-tech gadgetry in the latest-model automobiles; it’s like cruising along in a rolling entertainment center that drives itself.

But, an older pickup truck?

Sure enough, the 2005 GMC Sierra is chock full of electronic data.

Not only did Yokohama argue the destruction of the truck hampered its ability to defend the case, the Yokohama defendants claimed the Belows engaged in bad faith in allowing the pickup to be destroyed.

The Belows argued there was no intent to destroy evidence, and it goes to an issue addressed at this week’s Sedona Conference Institute: the problem that the preservation obligation begins at a time when you know the least about the case.

The court observed that a spoliation instruction was proper only where there is “an intentional act or bad faith by the party in possession of the destroyed evidence.”

However, the court also cited Fed. R. Civ. P. 37(e), noting that electronic evidence must be preserved and that the record indicated counsel could have done more to preserve evidence from the truck.

The court wrote, the failure to preserve the evidence “falls somewhere between negligence and gross negligence, but perhaps short of bad faith or intentional conduct requiring an adverse inference instruction.” The court didn’t note whether it was using the old or new version of Rule 37(e), which is significant because this action commenced before the effective date of the rule change. Fortunately for the Belows, the court didn’t find intentional conduct.

However, that doesn’t mean the Belows are off the hook.

Judge Conley said Yokohama argued persuasively that “the absence of this evidence should at minimum preclude plaintiffs from using it as a sword, even if defendants cannot use it as a shield.”

Thus, when the trial begins on Monday, the court will allow Yokohama to “explore how information from an inspection of Below's truck could have affected the experts' opinions at trial,” and it will prohibit the Belows from arguing Yokohama’s experts failed to explore or prove something if they were prevented from doing so by the negligence in preserving evidence. Judge Conley may also issue a spoliation instruction.

The Belows now begin their trial having already sustained court-ordered issue preclusion, and with a possible spoliation instruction hanging over their heads.

The moral of the story in Below is that counsel and clients need to be aware that ESI is everywhere—even where you least expect it—and that a failure to preserve it will hurt their cases.

In analyzing the failure to preserve in Below, the court noted the Belows were represented by “a sophisticated personal injury law firm, who know full well of their duty to maintain evidence relevant to likely litigation.”

However, as Judge Andrew Peck has noted at Relativity Fest, even sophisticated counsel may not be sophisticated in e-discovery practice.

It may not be necessary to retain e-discovery counsel in every case, but Below shows that we’re getting to the point where e-discovery and issues of electronically stored information should be considered in just about every matter—even cases involving an old pickup truck.

What Every e-Discovery Professional Should Know About FRCP 37(e)