Stephanie Clerkin Talks Innovation Awards and Her Secrets to Success 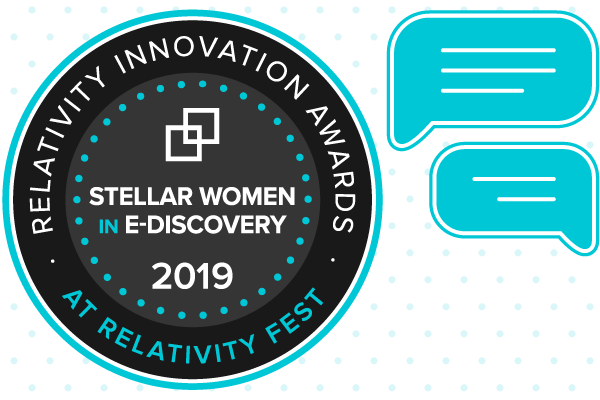 “The right attitude will beat the right experience in the long term.” Those words of advice, delivered by one of her college professors, have stuck with Stephanie Clerkin throughout her career. And they’ve proven to be more than just words.

Stephanie, the director of litigation support at law firm Korein Tillery, didn’t necessarily have the “right experience” when she started her career in e-discovery. Her background is in finance, of all things, and she started off working at a large regional accounting firm, where a small link to legal would ultimately shape her journey into e-discovery.

“I worked on fraud investigations, data analytics projects, and helped prepare damage models,” Stephanie explains. “My boss frequently testified as an expert so I would work with the attorneys who engaged us quite a bit.”

These small engagements sparked Stephanie’s interest enough that, in August 2013, she joined Korein Tillery as a project manager. It was a brand new role for the firm, and along with it came a brand new e-discovery software—which no one knew how to use.

So, with no other projects yet assigned to her, Stephanie stepped up to the plate. She taught herself how to use the software, as well as the basics of e-discovery.

It’s that type of drive and self-motivation that make Stephanie stand out from a crowd. It makes her the type of person you want in your corner. Some might even say it makes her award worthy.

In fact, a lot of people say it. Last year, Stephanie literally won an award for her work and attitude: the Stellar Women in e-Discovery Innovation Award.

We wanted to learn more about the woman behind the trophy, so we sat down with Stephanie to talk about her career, her advice for young women, and why the big win left her speechless.

Build Your Own Career

About a week after Stephanie started working at Korein Tillery, a new attorney with upwards of 20 years’ experience moved into the office right next to her. That attorney ended up being a huge resource to Stephanie.

“I knew almost nothing about e-discovery, but I was ready to learn. I’ve always been a self-starter, so I was excited about taking on a new challenge. She quickly became my go-to for e-discovery and case law questions,” she recalls.

Today, the tables have turned, and Stephanie is without a doubt her firm’s go-to e-discovery expert—but that doesn’t mean she thinks she knows it all. In fact, she can’t stop learning.

“Over the last almost seven years, I have been constantly learning more about e-discovery technology and the entire EDRM,” she says. “Having firm support to participate in industry organizations, to attend and speak at conferences, and to stay up to date on technology trends is a huge, intangible benefit and instrumental to my career.”

Her Advice to Future Stellar Women

A thirst for knowledge has been crucial to Stephanie’s success—and it’s something she encourages others to strive toward, too. Her advice? Start by reaching out to your peers.

“It’s important to be part of collaborative groups and surround yourself with people who have been in the trenches,” she says. “I am a member of multiple industry associations, including ILTA, Women in eDiscovery, and ACEDS. Conferences, such as Relativity Fest, are a great way to not only expand your knowledge base, but also meet new, like-minded people.”

Even in uncertain times like today, where social distancing is making in-person connections difficult, all hope isn’t lost. For her part, Stephanie has always turned to LinkedIn as an important, but underutilized resource.

“I have multiple industry connections that I communicate with frequently via LinkedIn, despite having never met in person,” she says.

Knowledge sharing is half the recipe to Stephanie’s success. The rest, she says, is all about ownership—and, of course, a bit of fun.

“You’re going to make a lot of mistakes. Be transparent and own them. Be yourself. Make work fun. You spend too much time here to be unhappy.”

“First, in true Stephanie fashion, I lost my voice the second day of Relativity Fest. Second, I didn’t prepare a thank you speech because I didn’t want to jinx it so I spoke from the heart when accepting the award,” she says. “Knowing my peers voted for me, plus learning about the other nominees and how incredible they are, made this win even more of an honor.”

Since winning the award, Stephanie says she’s still receiving touching messages of support from her peers and the community—an effect she never expected.

“It’s unbelievable. Even six months later, I am getting messages from people across the world. Winning has opened up so many doors too, including being invited to contribute to multiple webinars, articles, and podcasts.”

Today, if you go in Stephanie’s office, you’ll see her award on the top shelf of her bookcase. And you’ll probably find Stephanie, hard at work learning the next big thing.

Want to learn more about Stephanie? We asked her 15 non-work-related questions. Read her responses on the Relativity Community site.

A Conversation with Microsoft CTO & Relativity Board Member Kevin Scott